Crikey! Time flies when you’re having fun. So much has happened since our last blog post that I have started to feel guilty for not getting our posts up in a more timely manner. I’m trying to give up guilt for lent, so let’s just get right to it.

We experienced two fabulous carnivale celebrations here in Italy, two weekends in a row. The first was a parade and carnival held in the seaside town of Viareggio, just north of Pisa on the tuscan coast. Each year this small town hosts hundreds of thousands of visitors over 4 weekends to celebrate Carnivale, the season immediately prior to lent. While Venice is famous the world over for its elegant costumes and masks, Viareggio takes a completely different tack. They have a parade featuring giant floats with political themes. They satarize everyone from local, national and international politicians to the pope to John Lennon and Mother Theresa. No one is safe. The floats are enormous and impressive, with moving parts, loud music, and costumed riders. Here are a few photos from the event. 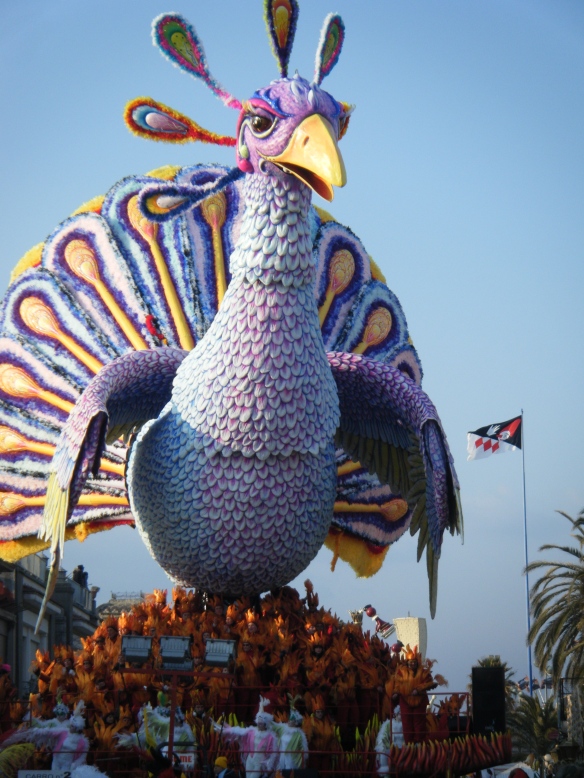 This is a closer view of the peacock float. All those flames underneath the bird are people in costume.

This thing is huge and it moves and roars. Note the size of the people on the float under the dinosaur.

This one was preceded by dancing nuns. They weren't all female.

One of my favorite parts of this celebration is the way the crowd interacts with the parade going by. In America we are kept at a safe distance on the sidewalk behind a rope. Here, you can be a part of the parade if you want to. Everyone is in the street. It is just up to you to get out of the way before the float flattens you. People dress up, they throw confetti, and you have to be armed with a can of silly string to fend off the little kids who try to spray you unaware.

Here’s one of the crazies in the crowd:

Can't get much cuter than that!

And here’s that same guy, corrupting the youth:

Be prepared and carry extra cans of this stuff - that's my motto!

Although it was really cold, everyone had a great time and came home exhausted. This was the first train trip for most students, and now, mere weeks later, they are old pros at getting around on the train. I wish I could fill you in more on the social criticism of the floats, but perhaps ignorance is bliss.