One of the many cultural activities that students, teachers, and (lucky for me) significant others can participate in during the semester abroad in Florence is a couple of Italian cooking classes. George and I went to the first of two offered during the semester. I see it as an opportunity to learn some new recipes and cooking techniques and to work with real Italian cooks. George sees it as an opportunity to socialize and eat. Don’t get me wrong – George is very helpful and participatory.

Our menu for the evening was:

We started our class by making dessert – salame dolce, or “sweet salame”. I had never heard of this dessert before and couldn’t imagine why salame was in the title. They had us begin by smashing up cookies that were very like graham crackers. George was a champion graham cracker smasher. A role model, really. The head chef had to stop him before he turned the bowl of graham crackers into dust.

Graham cracker smashing in progress. This was before George got a hold of it.

This is then combined with melted butter, egg yolks, sugar, and dark (really, really dark) chocolate cocoa powder. In order to replicate this recipe at home, I think we would have to use dutch-processed cocoa powder. You then roll it up into a a long, skinny, salame shaped roll covered in aluminum foil and put it in the refrigerator while you cook everything else.

Then it was on to the baked caprese salad. I’ve had caprese salad dozens of times, but never baked. They had grilled eggplant slices before we arrived. They had also blanched tomatoes and put an “x” on the bottom to make them easier to peel. We peeled the tomatoes and sliced them into rounds. We sliced the fresh mozzarella and then assembled the parts onto baking pans. First you put down three overlapping slices of eggplant in a triangle, topped by 3 slices of peeled tomato, and then topped by 2 slices of mozzarella. Drizzle with olive oil and sprinkle with dried oregano, salt, and pepper. Bake in oven until cheese is melty. Transfer to dishes and sprinkle with fresh parsley or basil. Oh yeah, and plenty of olive oil.

Ariana showing off our caprese antipasto. It was SO good!

And then there was the main dish – potato gnocchi from scratch. They had cooked the potatoes ahead of time. They said that you should only use red or white potatoes. Yellow potatoes are too sticky. You peel the potatoes and press them through a ricer or food mill. This is a very clever little contraption that reminded me of a big garlic press. It keeps the potatoes from getting too smashed and sticky. Then you add flour and an egg yolk to the potatoes. You gently combine, and then turn your dough out onto a floured surface and work in more flour until you have a nice consistency. (This is where things get vague. You just do what they say until they tell you it is right.)

Then you pinch off handfuls of dough and roll it out into fat pencil shapes. You cut these with a knife into little pillows of potato pasta. Making sure you have enough flour that they don’t stick to each other, you put these on a pan until you’re ready to cook them. Meanwhile you peel some tomatoes, and cook it in olive oil and garlic for about 10 minutes. You boil the gnocchi until they float, remove them from the water and stir them around in the tomato sauce. Result? Light, floaty, delicious gnocchi.

Here we are about to sit down to our home-cooked meal.

Ready to enjoy the fruits of our labors.

And now, the moment you’ve all been waiting for… Here’s why they call it Salame dolce… 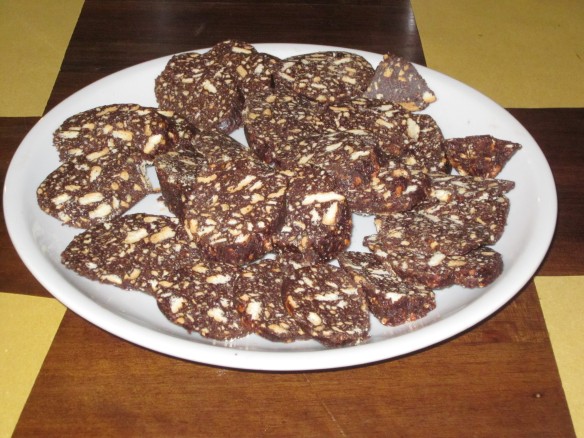 This is all kinds of chocolatey goodness. It really looks like salame, doesn't it?

This dessert was absolutely amazing. I’ve never had anything like it. The chocolate flavor was intense. I made this the following week and it turned out really great.

I have recipes for everything we made. I’ll post them separately when I get a minute.